Moss can grow on paths, patios and concrete areas and, in extreme cases, render them completely unusable. It easily spreads and forms a dense layer of soft vegetation across a wide variety of flat and vertical materials including brickwork, tiles, concrete and aggregate. This can become especially hazardous during wet weather, since moss renders surfaces slippery and makes the use of paths or communal areas dangerous.

Although it can be aesthetically pleasing in the right surroundings, moss growth can also prove an eyesore on commercial or private property. If growth occurs in the wrong place, the plant’s spores can make it difficult to remove time and again.

Our professionals will evaluate moss growth and use the most efficient methods to remove it from a multitude of different surfaces and locations. If you have a moss problem and require its removal from your premises, Glendale is here to help.

Call Glendale now on 01257 460461 or send us a quick enquiry, and we promise
that we will respond to you quickly

The major risk associated with moss is its ability to make surfaces very slippery. Paths, car parks, decking, patios, walkways, pavements and outdoor communal areas can become hazardous when infected by moss. When left unchecked, moss growth is capable of negatively affecting a business’s operations. The presence of moss in dynamic areas can cause difficulties with manoeuvring across premises, and increases the likelihood of slips and trips, putting the well-being of personnel at risk.

In addition to causing a slip hazard, moss can hamper water flow and prevent water from draining away quickly, especially during flooding. This is due to its ability to absorb liquid. Although flooding does happen in urban areas, moss that is located in wooded areas, fields and bogs is often a cause of preventing flood water from receding. This in turn can impact upon developed areas such as roads, pathways and other structures.

Moss growth on signage can also prove a significant risk. If motorists are unable to clearly read signage, vehicles can create avoidable hazards when entering or exiting your property. These are just some of the reasons why the owners of commercial premises should consider moss removal.

How Glendale can help

Moss removal jobs can vary enormously in scope and treatment depends on the location and scale of the problem. Different species and environments have specific challenges and require specialist methods to carry out the work. We strive to complete all removal practices in a manner that is sympathetic to the surroundings, avoiding damage to surfaces wherever possible.

Glendale will listen to your needs and concerns before coming back to you with a viable plan to address your situation. In addition to professional moss removal, we also provide weeding services against invasive species.

By contacting Glendale, you ensure that any moss removal work required will be carried out by experienced professionals who understand the task at hand.

While hard surfaces usually prove fairly straightforward to treat, removing moss infestations on lawns and turf has its own set of challenges. Power washing, scrubbing and chemical removers can be good choices, but they must be used appropriately and only in the right circumstance. For instance, pressure washing large areas isn’t cost effective; repeated treatment can damage surfaces and even encourage rapid regrowth.

Using herbicides on moss can cause its own problems and should only be used under professional supervision. This is because using the wrong type of weed killer can actually act as a fertiliser and help the moss to regrow.

By contacting Glendale, you’re ensuring that any moss removal work will be completed in the best. Our teams are trained to carry out all work precisely, using the appropriate methods to achieve a quality finish.

Did you know? Some species of moss can absorb up to 20 times their weight in water.

Not what you're looking for?
Take a look at some of our related services. 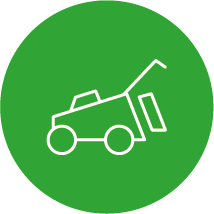